Join us at the in person event taking place on 22nd September 2022. Holding the Flame has been developed in Partnership with 81 Acts of Exuberant Defiance (1981- 2022). Supported by Lambeth Council, the Met and Arts Council England.

It is a prominent AR-Statue of civil rights campaigner Marcia Rigg. It was specifically created to be in dialogue with its site – the square outside Brixton Police station; a place significant both for its role in the Brixton uprisings of 1981, and for Marcia’s brother Sean Rigg, who died in Police custody there in 2008, in circumstances resonant with George Floyd.

Marcia stands in a gesture of love and resilience, and as a challenge to the role & equity of London’s public monuments. She holds flowers in one hand, out toward the memorial tree – an act she does every year. The other hand holds a vigil candle, clenched in a black power fist, she is commanding change.

Audiences activate the statue by downloading an app, which instructs them to point their mobile phone at a trigger sign sited in a barrel planter in the Square. The App is audio-visual, they can listen to Marcia speak to the emotions and intentions embodied in her statue and as the statue appears so does the sound of her breath:

“for this is not a statue of someone who can no-longer breathe”. “Hearing the sound of my breath is important. I’m here, I’m alive, I’m not going anywhere. This is a living statue and I’m telling our story” –

Marcia Rigg will be in attendance at an event on 22nd September.

This marks the culmination of a year-long programme of events commissioned by 81 Acts of Exuberant Defiance, an initiative designed to raise questions and stimulate discussion about the state of race relations 40 years on from the 1981 Brixton Uprisings.

Thor McB Artist Holding the Flame will feature as part of the GLA’s London Unseen + Open Houses Festival 2022. London Unseen, a programme of community heritage trails, tours and events, funded by the Mayor of London’s Commission for Diversity in the Public Realm. Find out more: london.gov.uk/london-unseen

The Holding The Flame piece was commissioned by 81 Acts of Exuberant Defiance, produced by The Brixton Project, created by Aswarm in association with UFFC and Marcia Rigg with support from The Met Police. 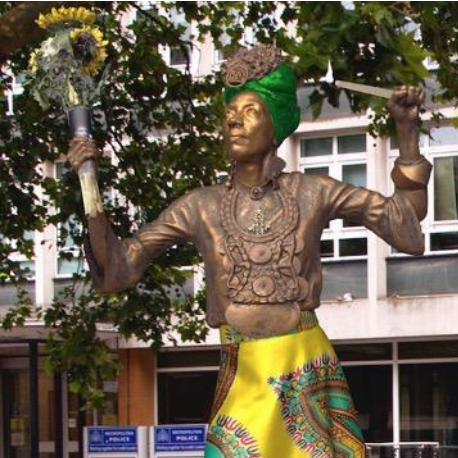